Otis the is the world leader in elevator installation and service, yet it only has a market share of 10%.  As can be seen the industry is very competitive and so a significant basis of competition is its cost. And a significant chunk of this cost is in its service contracts. Given that 65% of Otis’s profits are from maintenance, Otis is at the forefront of using data to reduce its costs associated with maintenance.

A quick calculation shows the importance of this. Otis has 2 million service contract elevators transporting 2 billion people daily with only 30,000 service technicians worldwide. This amounts to 60 million hours servicing elevators yearly. The median pay for 2015 was $39 per hour for elevator service technicians. Assuming a conservative $25 for worldwide average pay, leads to a net spend of $1.5 billion. For a company with revenues of $12 billion and operating profits of $2.5 billion this is a significant cost.

Traditionally a service contract is for 5 years, and are designed according to the type, age and expected pattern of us for each elevator. These contracts include not only scheduled monthly servicing but also unscheduled calls because of elevator breakdowns. Thus, unscheduled cost have both the direct impact of increasing servicing costs but also disrupting the scheduling of technicians, ultimately requiring an additional capacity of technicians to be on hold.

Otis has tied up with Microsoft and AT&T to use data to battle these costs. So far it has installed Remote Elevator Monitoring (REM) in 300,000 of its 2 million elevators. It has installed several sensors on these elevators, which collect hundreds of various data points. These data points include “how far has the elevator travelled over its lifetime” or “what is its braking deceleration” 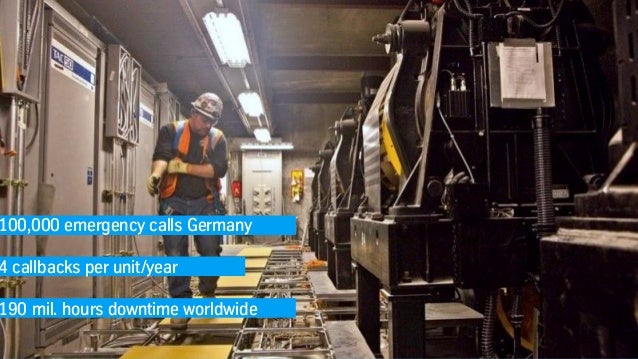 While REM is used in reducing response time of technicians, its most powerful ability is predicting failure. In using data points for elevators across the world, Otis is able to look at historic failure rates of different elevator parts and the preceding conditions. It then has the ability to perform a cost benefit analysis of sending in a technician against the statistical confidence of its predictive model. And this predictive model only gets stronger with time as more data points are fed into the model. Ultimately elevator downtime is reduced creating value for the customer and Otis’ costs are reduced allowing it to capture some of the value.

Otis should leverage this data in other avenues. In its current model the data is predictive but does not give much insight into root causes. By hypothesis testing, Otis should figure out the causal relationship and use this understand in its design and manufacturing of next generation elevators.

Otis can also broaden its market. While other elevator companies are following similar strategies, Otis should target elevators of other manufacturers. Otis can use its data from its initial 300,000 REM elevators as a head start to offer cheaper service contracts.

Ultimately Otis has many ways in which it can leverage this data beyond its first use case described above.